For those of you that missed Chris’s presentation below are two links.

This link is for his presentation.

This link is for his Bio.

Posted in Uncategorized | Comments Off on Chris Leonard

A great article about the river. While it is dated it still very much applies to today.

Posted in Uncategorized | Comments Off on East Walker

Jen Hemmert is the current CDFW Wild Trout Biologist for Riverside and San Bernardino Counties. She works under the Heritage and Wild Trout Program (HWTP) based out of Fisheries Branch in Sacramento and works on projects to access and manage the trout populations of forested streams within these counties. She fills a fisheries positional need, that was vacant for some years by the California Department of Fish and Wildlife. During the in-between years, the wild trout and natural resources were continued to be assessed and data collected by other CDFW regional and Fisheries Branch trout biologists until she pivoted into her new role with CDFW. For the six previous years of her CDFW career, she managed reservoir and lake fisheries in these same two counties plus Imperial County, which included projects on the Colorado River. Since she started working for Region 6, she has always had a leadership role in the CDFW trout stocking aspect of recreational fisheries of lakes and streams in Southern California, and works under Sport Fish Restoration Grants awarded by the U.S. Fish and Wildlife Service.

Before joining CDFW, she worked for the State under the Department of Water Resources in both their field office in West Sacramento and Bay Delta Office in downtown. Her many projects in the Central Valley included tracking juvenile chinook salmon through the Bay-Delta waterways and assessing impacts of predation of salmonids by striped bass movements and habitat preferences. Both of these projects were focused on GPS telemetry tracking of fish using surgically implanted tags and corresponding GPS receivers placed throughout tributaries, rivers, streams, and canals of the Sacramento River Watershed spanning hundreds of stream miles out to the Golden Gate Bridge in San Francisco.

Lastly, she worked for UC Davis as an associate researcher and had an AmeriCorps National Service position serving under a non-profit salmon group in the Yuba River watershed in the Sierra Foothills in Northern California. The non-profit job brought her to California. During her fisheries and natural resource career in California, she has monitored mountain meadows, conducted water quality programs, snorkeled streams, e-fished lakes from boats and backpack e-fished streams, surveyed for macro benthic invertebrates, and worked with 100’s of volunteers conducting citizen-based science. She has a Bachelor of Science Degree in Zoology with a focus on Freshwater Ichthyology from the Ohio State University. Her favorite football team, of course, is THE Ohio State Buckeyes.

Posted in Uncategorized | Comments Off on Speaker for September 14, 2021

Posted in Uncategorized | Comments Off on We are On Instagram 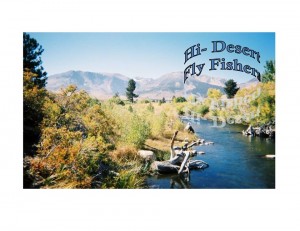 Hi Everyone! Check out our NEW Facebook page and “LIKE” us, Rodney has done a fantastic job setting it all up and keeping all of us up to date on all of the latest outings and events. Thank you Rodney!

Posted in Uncategorized | Comments Off on New Facebook Page!

Hello Everyone, Our next schedule meeting will take place on September 14, 2021.

Our Speaker is Jen Hemmert from CDFW.

Hope to see everyone there, Tight Lines!

Posted in Uncategorized | Comments Off on Next Scheduled Meeting!

Here’s a great Video to Watch!

The Deepest Valley from Zangs Films on Vimeo.

Posted in Uncategorized | Comments Off on Here’s a great Video to Watch!